Mathematics has always been a very interesting subject since the beginning of human life; where the early humans used sticks and stones to count and calculate; proceeded to the fingers and then the lines on the fingers; which in turn gave rise to writing and other concepts and this have lead us to the modern age of such great advancements in the field of mathematics. 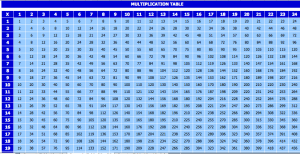 Multiplication table has a few features which include its basic terminology. This table has numbers written in a square, which means it has equal number of blocks along its length and height. There are rows and columns in a table, the lines which are horizontal are called rows and the ones which are vertical are known as columns. So a multiplication table will have equal number of rows and columns (if it is an N×N table). The blocks with in the table other than, the top row and left most column, will all have products of the numbers along the top row and the left most column; written in them. A few of the uses of times table or multiplication table are specified as follows:

The multiplication table has a fundamental role in the base building concepts of the students. It helps a lot to undergo the basics and provides a faster learning technique to the students.