Science began with four basic elements namely Earth, Air, Fire and Water but with the progress leading to discovery of new elements scientists felt the need of a table or chart listing all the known elements in specific order according to their similar properties. They named this chart of elements as Periodic table.

Antoine Lavoisier was the first one to arrange the discovered elements in groups of metals, non-metals, gases and liquids, but scientists were not satisfied with this arrangement and this dissatisfaction lead to the Johann Wolfgang’s Law of triads in which he arranged similar elements in groups of three. Later on the discovery of atomic and mass numbers of elements lead to the new arrangement of elements on the basis of their mass numbers proposed by Russian chemist Mendeleev. Mendeleev arranged elements in rows and columns in ascending order of their mass numbers and left space for undiscovered elements. But Mendeleev’s periodic table had many flaws in it. In spite it was a revolution in field of chemistry but it had small flaws like it could not explain isotopes because of their varied mass numbers from the original element. Later on Mosley proposed the now known as modern periodic table on the basis of ascending order atomic number of elements. This arrangement perfectly arranged all the elements in rows and columns. Every row also known as a period starts with the filling of electrons in the new shell of an element while a vertical column known as a group has elements with similar outer electronic configuration. Modern periodic table has also been divided into four blocks namely s, p, d, and f. These groups are formed in order of the outer electronic configuration of elements.

First two groups of periodic table make up the s block , the middle ten groups make up the d block, while the last six groups form the p block while the two rows of elements placed separately, are after the elements actinium and lanthanum are known as lanthanides and actinides make up the f group. Mosley’s periodic table consists of seven periods and eighteen groups. There are small periods with two elements and longest with thirty-two elements whereas last period is incomplete with vacancy for new elements yet to be discovered. The sixth and seventh period include lanthanides and actinides which make up the f block of the periodic table. The eighteen groups arranged as 1 to 18 according to American system. Each group has specific elements with similar properties. The groups extend from first group of Alkali metals to the eighteenth group also known as zero group comprising of inert or noble gases. The elements of groups 1, 2, 13, 14, 15, 16 and seventeen are known as representative elements. The elements of groups 3 to 12 are known as transition elements and actinides and lanthanides are known as inner transition elements and they are also member of group 3. All elements in a group have similar chemical and physical properties because they have similar electronic configurations. 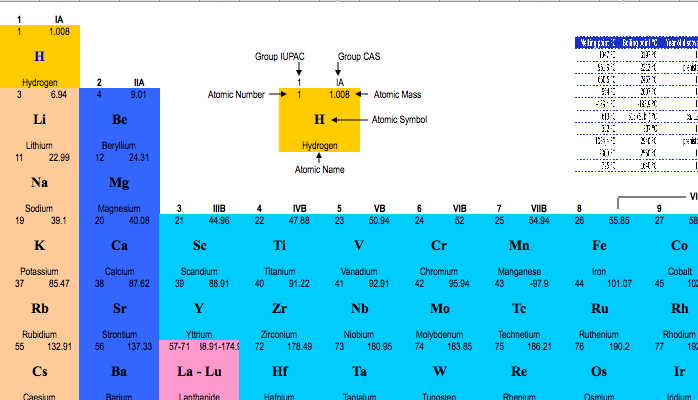